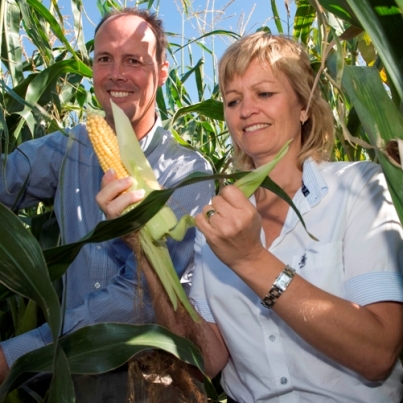 Monsanto will halt production of genetically modified corn in all of Europe, except Spain, Portugal and Czech republic. The agribusiness multinational states not to spend any more money on trials, development, marketing, court cases or anything else to get GM corn accepted in Europe. 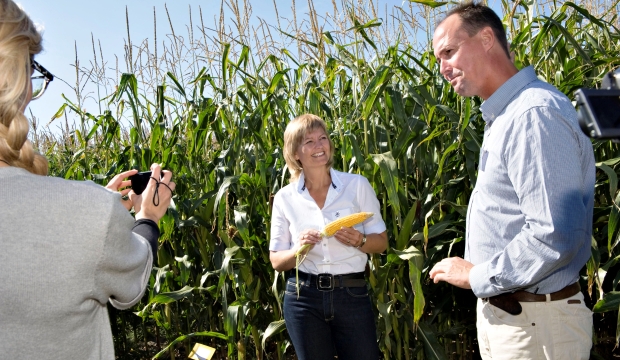 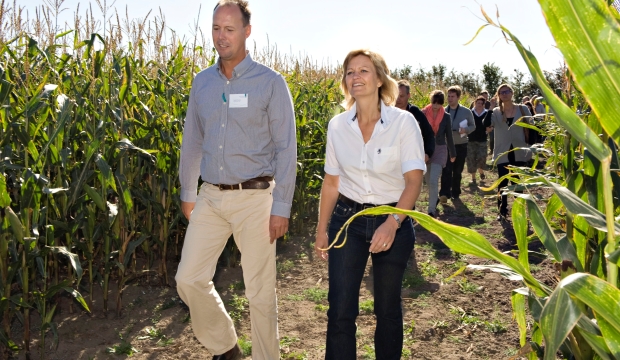 Gerhard Deneken and former minister Eva Kjer Hansen leading the gentleman of the press in the corn field. 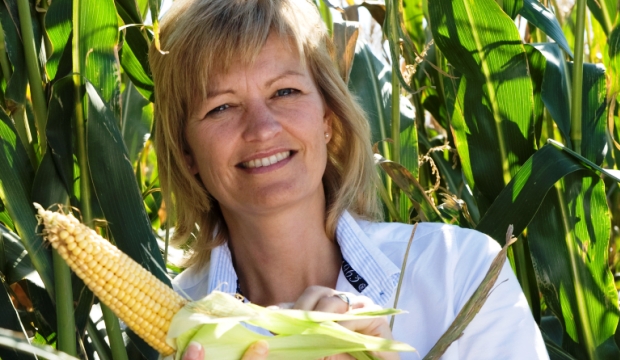 »It's natural to be sceptical, but we will challenge this sceptisism and hopefully kill some myths. GMO has a potential, which we are forced to take into consideration. We need more scientific research to have a background for decision," said the former minister in 2009. The trials failed and the results are now kept secret. 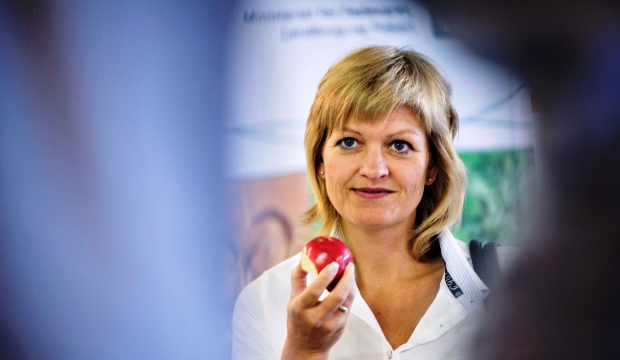 Apples are also made with GMO. Want to try? 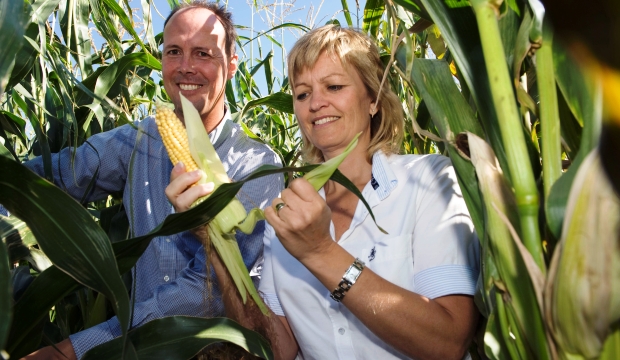 GMO corn looks like all other corn in the sun. 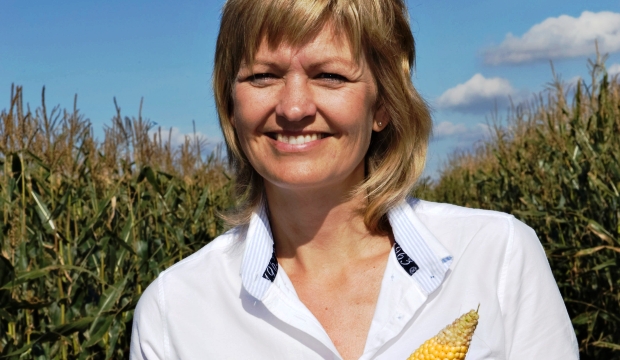 ”In Europe Monsanto only sells GM corn in three countries. GM corn represents less than 1% of the EU’s corn cultivation by land area. Field trials are only in progress in three countries. We will not spend any more money to convince people to plant them,” states Brandon Mitchener, Public Affairs Lead for Monsanto in Europe and Middle East, in an interview with Investigative Reporting Denmark.

The decision was taken quietly. The company found no reason to communicate it. This means that every agribusiness company has now given up on genetically modified crops in Europe – apart from selling them in Spain and Portugal.

“This is not surprising, knowing that BASF stopped its biotech research in Europe in 2012 and Syngenta moved its research years before. It will influence the international expansion of GMOs on a global scale,” comments Klaus Sall MSc.

Sall has been studying the politics of the GMO industry for several years, and is now working as a strategic business adviser. He has just written a status report on the development of GMOs in the EU for The Danish Ecological Association (Økologisk Landsforening).

BASF, Bayer and Syngenta halted their development of GMO potatoes in Europe in 2012, for the very same reasons as Monsanto – the battle was lost.

However green organisations are still fighting the agribusiness company – in Europe and the rest of the world.

”We are not a biotech company and NGOs campaigning against GM cultivation in Europe are beating a dead horse,” Brandon Mitchener points out.

Only Spain and Portugal face GMO-growth
In Czech Repulic the sale of GM corn declining, the only countries where it is on the rise being Spain and Portugal. Currently GM corn field trials are going on in just three countries: Romania, Slovakia and Czech Republic. They are done by academic partners of Monsanto or for EU variety registration. Totals here.

“We stopped most of the trials, including the trial in Denmark, following a strategic decision in 2011 to focus our commercial activity in Europe on high-performance, conventional hybrid seeds. Monsanto has a thriving business in Europe with conventional seeds and crop protection products. As a matter of principle, Monsanto will only seek to sell biotech seeds in countries where there is broad customer and political support for them as well as a functioning, science-based regulatory system – conditions which only apply in a few countries in Europe today,” says Brandon Mitchener.

She told the press that in three years time Denmark could face acceptance of GMO crops and that a lot of farmers would be growing it. She invited journalists on a road trip and let them touch the GMO maize in the trial field in Tystofte near the Danish city Skælskør.

Two years later, in January 2011, Monsanto expanded these two years of examination with an additional year of testing, which was accepted by the Danish Environmental authority, Miljøstyrelsen.

The procedure is that crop companies’ new crops will be tested by the authority for two years before possibly being allowed for selling and growing in Denmark. At the time, Monsanto wanted to test a total of five different varieties with the transformation NK603.

Trial results are normally open to the public. In this case Monsanto explicitly asked to keep the test silent, and they withdrew the varities before the testing finished, so no results were published.

No information has then been released on these trials.

Fighting for access to trial results
Investigative Reporting Denmark has, together with an organisation for openness, Åbenhedstinget, asked for access to the results. It turns out the trials failed in the second year. On the 1st of February 2011 the authority stated that the GMO crops could not be allowed on the basis of the trial results of the first two years. The authority recommended one more year of trials.

The new maize crop resistant to Round-Up only performed 97 pct. compared to traditional maize for the two test years in total, the authority (Plantedirektoratet, Afdeling for Sortsafprøvning, Fagudvalget) writes. It also warns for the harmful effect of the herbicide Round-Up and concludes that the most realistic outcome is that the crop will not be allowed for growing in Denmark.

Monsanto cancelled the different crops from growing trials on different times. The last was cancelled on the 1st of February 2012. By doing that Monsanto could keep the failure out of the public domain.

Authorities support Monsanto on silence
The authorities have – after more than two months consideration – decided to follow Monsanto’s wish to keep the trial results silent.

Key documents in the FOI-case.
The main argument is that publication of the trial results would have an economically harmful effect on the company, despite the fact that the crops did not pass the trial.

Investigative Reporting and Åbenhedstinget together raise the case for The Danish Ministry of Agriculture. From a scientific viewpoint and for the use in other countries it is necessary to also get results of failed trials published, argue the two organisations.

“It is corrupting to the scientific method itself, when companies can decide that only positive results can be published. Therefore it is important to have this research published,” stresses Klaus Sall.

“This a good example of the need to require companies to accept free access to their GMO seeds, for scientific research, when the crop has been released for import to the EU as NK 603 has.”

Danish trial to be reported later

Brandon Mitchener from Monsanto points to a webpage where trials are reported. The Danish trials will be reported there later this year. The actual data from the trials are not included in the reports.

“I cannot believe that any company would ever voluntarily disclose information that might be useful to its competitors. It’s unrealistic, even surreal, that anyone would expect us to. Laws already strike the proper balance between confidentiality and transparency,” says Brandon Mitchener.

The horse is dead.

Experts getting moved away from GMO
In September 2009 The Danish Ministry for Agriculture and Food published a 235 page report on in an attempt to revitalise the debate and have GMOs allowed in Denmark. This took place on the same day as the roadtrip for the press to trial fields.

The report was met with a heavy criticism in the public debate. Today the topic is closed.

”Currently no agribusiness companies have GM varieties under testing for registration at The AgriFish Agency anymore,” explains Kristine Riskær, head of the center for farming and plants in the Danish State Authority for Farming, NaturErhvervsstyrelsen, a branch under The Danish Ministry for Agriculture and Food.