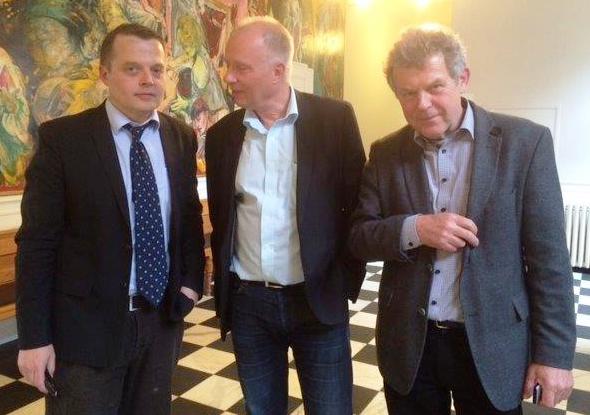 Two journalists, Kjeld Hansen and Nils Mulvad, released a story in October 2010 about the spread of pig-to-human infection, which subsequently led to four deaths.

Lawyer Tyge Trier (left) with the two journalists Nils Mulvad (middle) and Kjeld Hansen (right) in the district court of Aarhus 6 of May. The verdict came 22 of May 2014. Photo: Lone Hougaard.

The story from 2010 violated the Data Protection Act, according to the district court in Aarhus. On 22 May the judge sentenced journalists Nils Mulvad and Kjeld Hansen to a fine of 2.500 Danish kroner each.

Public interest was not large enough to indicate that people on one of the farms themselves were infected. It was too easy to identify these people, and their right to protection was higher than the public interest in knowing about the infection on the farm, according to the judge.

Shooting the messenger, according to lawyer

– The judge concluded in the verdict that we said it was not necessary for the story to mention the identity of the infected people. And then the judge used this to say that we ourselves have said it was not necessary to point out the names of the farms. But that is a wrong quote. The whole idea of the story was to identify the farms as potential places for infection, said Nils Mulvad to Göteborg-Posten just after the case.

– If the judgment stands up, it is looking really grim for the freedom of the press in Denmark, continued Nils Mulvad to GP.

The lawyer for the two journalists, Tyge Trier, says he is disappointed and that the judgment is an example of shooting the messenger. The low penalty means the decision can only be appealed by special permission.

Journalists will appeal the fundamental part of the verdict

After consideration the two journalists have decided to try to appeal part of the verdict – the most important on the level of anonymisation that is necessary.

– We want the court to accept that what we have been publishing on the web since end of October 2010 is in the line with Danish law, says Nils Mulvad.

According to Oluf Jørgensen, media law expert at The Danish School of Media and Journalism, the verdict is unclear on the level of anonymisation that is necessary. He has recommended the two journalists to keep the information on infected farms open to the public and only remove the number of infected people on the farm.

– Actually, we can still publish the names of the farms after the verdict. The verdict is not very clear, but after consultation with media law experts, we have decided to keep all information about the infected farms on the web, and only remove specific information on infected people, which might be regarded as not being anonymised enough, says Nils Mulvad today.

See  the anonymised version of the original story.

He points out that not appealing the whole verdict does not mean they agree with it. They still think it was necessary at that time to name the farms and how the bacteria jumped to humans without the authorities trying to stop it.

Fact: This has happened