In Denmark, there are more than twice as many pigs as humans, and twice as many antibiotics given to the animals as well. A perfect breeding ground for resistant bacteria – to which politics have failed to respond. 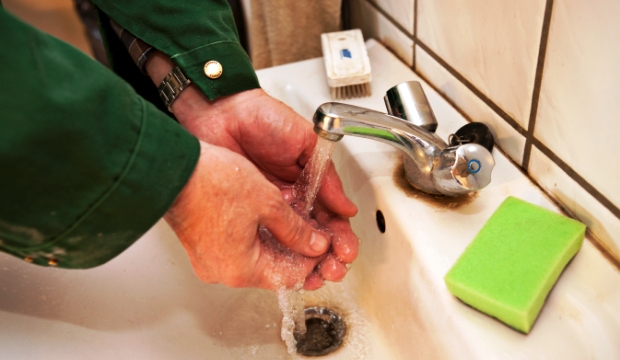 Washing hands on his way in and later out of the stable is an important method for protecting against MRSA in Denmark. But it has not stopped the spread of the superbug.

In November 2013, a 63-year-old man with diabetes and end-stage kidney got fever because of inflammation. Samples of blood grew the resistant pig-bacteria, methicillin-resistant Staphylococcus aureus, MRSA, CC398. Three weeks later the man died.

By analyzing the specific type of the bacteria, doctors identified the cause of the infection. It was another man. Someone carrying the same type of bacteria, staying in the same outpatient clinic at Odense University Hospital; a nasal and pharyngeal MRSA-carrier.

The dead man is proof that bacteria of animal origin now transmit directly between humans in Denmark. It does not need pigs anymore – but can jump directly from one human to another. The man from the Odense hospital is one out of two cases described May 2016 by Danish doctors in the journal Emerging Infectious Diseases.

In Denmark, the focus on resistant bacteria for some years has been especially high on MRSA coming from pigs. In humans, it can be present on the skin, commonly in the nose, without causing harm. Yet when it enters the wound of a weakened patient, as it happens after surgery, it can lead to threatening infections.

“We see a picture of an epidemic that is out of control. Authorities have done remarkably little and seem at all levels perplexed,” wrote a leading researcher in human disease treatment, Hans Jørn Kolmos from the Department of Clinical Microbiology, Odense University Hospital in late September 2013.

“The Danish Veterinary and Food Administration has now, seven years after the problem was documented, still no overview of the epidemic, and has done nothing to halt the spread of infection”, Kolmos writes.

Highest pig-man ratio in the World

Denmark has the highest pig-man ratio in the World. The country with 5.7 million inhabitants has an average population of 12.7 million pigs. The use of antibiotics in the country reflects this. In 2014, humans in total in Denmark got 53 tons of active antibiotics, while pigs got 86 tons.

In 2007, the first case of presence of humans carrying a strain of MRSA coming from pigs was recorded. Yet little was done to stop the spread of the bacteria. MRSA usually does not harm pigs.

The authorities followed the amount of affected meat at the slaughterhouses, but they did not demand farms to get their pigs tested. Then, farmers could not warn employees and visitors of the potential risk.

This has consequences for the whole of Europe. According toEurostat, Denmark is the leading pig exporter. In 2013, more than half of young pigs in Europa came from Denmark, meaning the rest of Europe can also get MRSA from the Danish pigs.

After growing public awareness of the problems since 2010, the Minister of Agriculture at that time, Mette Gjerskov, established a task force to propose several initiatives to stop the spread.

The main proposal was to closely follow the spread in pig farms and establish an MRSA-free trade way. Per Henriksen, head of the Danish Veterinary and Food Administration, rejected the plan silently. Instead, the authorities sat up some minor initiatives based on a strategy of accepting all pigs as carriers.

The Danish Veterinary and Food Administration and the Ministry of Agriculture rejected to disclose which farm had MRSA-carrying pigs. Only after a FOI-case and later a court-case, the authorities were forced to give out this information in March 2016.

A main problem is that only around one in ten farms are being tested, so there is still no information on the status of MRSA in most of the farms and there is no MRSA-free trade way. Investigative Reporting Denmark has published an exclusive investigation into the numbers.

Antibiotic use on every farm

When the public awareness of MRSA rose in 2010, the Danish parliament also decided to introduce a system warning and fining farmers, when their use of antibiotics was too high. The authorities set up a system for gathering data on antibiotic use and the number of pigs on each of all 4000 pig farms in Denmark.

Since the introduction of the scheme, 130 farmers have received a warning, yet none has been fined, according to information received by “Investigative Reporting Denmark” in September 2014.

After getting the data, “Investigative Reporting Denmark” presented a method to calculate the amount of antibiotic used on every farm in Denmark.

A system called Vetstat has been used to surveil antibiotic on stable-level in Denmark for more than 20 years. It is regarded as a success, because the use of antibiotics was reduced by 16 percent since 2009. The recent Danish minister of Agriculture, Esben Lunde Larsen hopes the Danish system will be part of a new EU-initiative to prevent development of resistant bacteria.

Yet the data in Vetstat is not publicly available. A request for data was delivered in 2006. The data was received for the first time six years later, in 2012. The data showed all the pigfarms with heavy use of antibiotics and was later the background for the warning system.

In 2014, the Danish Audit Agency started an investigation on the Ministry of Food and Agriculture and The Danish Veterinary and Food Administration because of a case with swine-MRSA. In October 2015, this investigation finished with a heavy critique.

The ministry administrated MRSA in pigs nearly only looking on the cost of the production of pigs, not taking care of the implications for the society – especially the health sector, concluded the agency.

MRSA in pigs has been the main focus point in Denmark for years. Another issue has been a growth in MRSA from Danish people visiting foreign countries. MRSA from pigs now count for four out of ten cases of MRSA-infection, MRSA originating from foreign countries count for less than two out of ten. Today doctors calculate 12,000 Danes are carrying pig-MRSA 398 – most without knowing.

Carbapenemase-producing enterobacteriaceae (CRE) are bacteria that are nearly resistant to the carbapenem class of antibiotics, considered a drug of last resort. The bacteria can kill up to half of patients who get bloodstream infections. In 2014, CRE were found in 29 Danish patients – twice as many as the year before. Often these patients had been hospitalized in a foreign country before getting back to Denmark.

Both for VRE and CPE there are no screening of patients, so the total number might be much higher, warns Dr. Robert Leo Skov from Statens Serum Institut.

Robert Skov was until June 1st 2016 area manager for Bacteriological Surveillance and Infection Control and has been responsible for the Danish MRSA strategy in recent years. It was Skov who collected the nationwide statistics. He is still connected to SSI.

“Most patients have only had them in the intestine without getting sick of them. In the near future we have in Denmark a substantial risk that we can stand with infections without any effective antibiotics to treat patients,” warns Robert Skov.

Extended-spectrum beta-lactamase (ESBL) are related to E.coli and often found in human intestinal flora. In Danmap 2014 the total number of ESBL bloodstream infection in 2014 was counted to 261 of which 27 died in one Month, meaning their death is regarded as related to ESBL.

The Danmap 2015 is planned to be released in October this year. According Anette M. Hammerum, Head of Antimicrobial Resistance Reference Laboratory at SSI the counting of numbers for human blood poisoning for ESBL, VRE and CPE in 2015 is not ready, but will be published in October.

SSI has still not decided to count the number of deaths due to these three other superbugs.

“We then have no number or estimate of the total amount of deaths in Denmark related to resistant bacteria,” she says.

Only for MRSA the counting is precise. According to SSI, there is every year around 350 deaths related to Staphylococcus. Since 2012 in total 34 deaths have been related to MRSA, and of these six is related to MRSA CC398. It is an average of 8 each year, much less than the 13 known deaths from CPE and 27 from EBSL in 2014.

In April 2014, a 74-year-old nursing home resident was admitted to the Odense University Hospital with severe pneumonia, the doctors continue their report to Emerging Infectious Diseases. Blood cultures grew MRSA CC398 spa type t034. Despite relevant treatment with piperacillin/tazobactam, metronidazole, and vancomycin, the patient died from respiratory failure after 1 week.

It turned out the patient was infected from another resident living in the same nursing home.

This story was first published by Correctiv:
Pigs and bacteria
It is part of they longterm-investigation in resistent bacteria.

One thought on “Poor results: Giving up on resistant bacteria in Danish pigs”