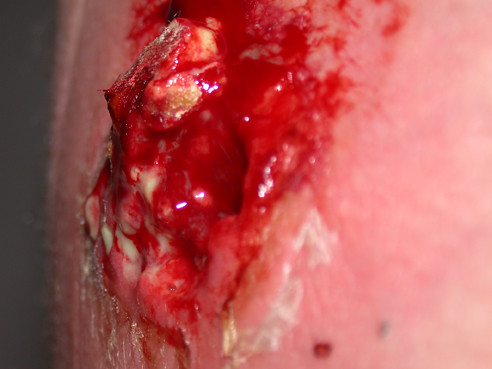 Children with abscesses at the size of tennis balls in a Kindergarden in Løgstør, Denmark. Flickr.

On 21 October 2010, journalists Nils Mulvad and Kjeld Hansen published an article on the website Aabenhedstinget.dk, a forum for debate on public law and journalism.

They wrote of a silenced case about the difficulties in treating abscesses and ulcers in two children in the city of Løgstør in Jutland. The children were carrying resistant bacteria (MRSA). It became known by a medical professional journal.

Mulvad and Hansen used the Løgstør case to show that the government had lost control of MRSA. They named 12 farms in Denmark as the sources from which the infection spread – information the authorities wanted to hide.

The National Board of Health notified the police and now the two are charged for violating the Danish criminal law for publishing secret information on farmers’ health.

Identifying and listing the infected MRSA-farms

Since 2010, the two journalists have been trying to get current information on the pig farms spreading the resistant bacteria, so far without success.

But the two may be sentenced for publishing the information that possibly should be public – if the Ombudsman’s final report is having the same conclusion as the tentative.

Nils Mulvad works as an associate professor at The Danish School of Media and Journalism in Aarhus, and he runs a consultancy company, Kaas & Mulvad, on research and data analysis. He calls it “non-sense” that names of infected farms would be sensitive personal information:

“It’s business information that the employer is obliged to inform their employees about. It is quite elementary that the authorities should disclose environmental hazards that can spread to the surrounding areas. It follows from the EU directive on environmental information, which is of course also implemented in Danish law.”

But do farm owners’ children not risk being labeled in school?

“On the contrary you could fear that all those involved in pig rearing would be regarded as reservoirs of infection if the facts are kept secret. Transparency is usually the means to deal with ignorance,” says Nils Mulvad.

The case will run at the district court in Aarhus on Tuesday, 6th of May 2014. Penalty framework for the dissemination of health information without consent is a fine or imprisonment of up to six months.

In this case, they are charged for a fine.

This story has been published in Göteborgs-Posten Sunday 4th of May 2014, second largest subscribed daily in Sweden. The author Staffan Dahllöf has permitted us to bring it here. Nils Mulvad and Kjeld Hansen are both writing for Investigative Reporting Denmark.

The two journalists wrote September 2013 their version of what have happened in the case (in Danish).