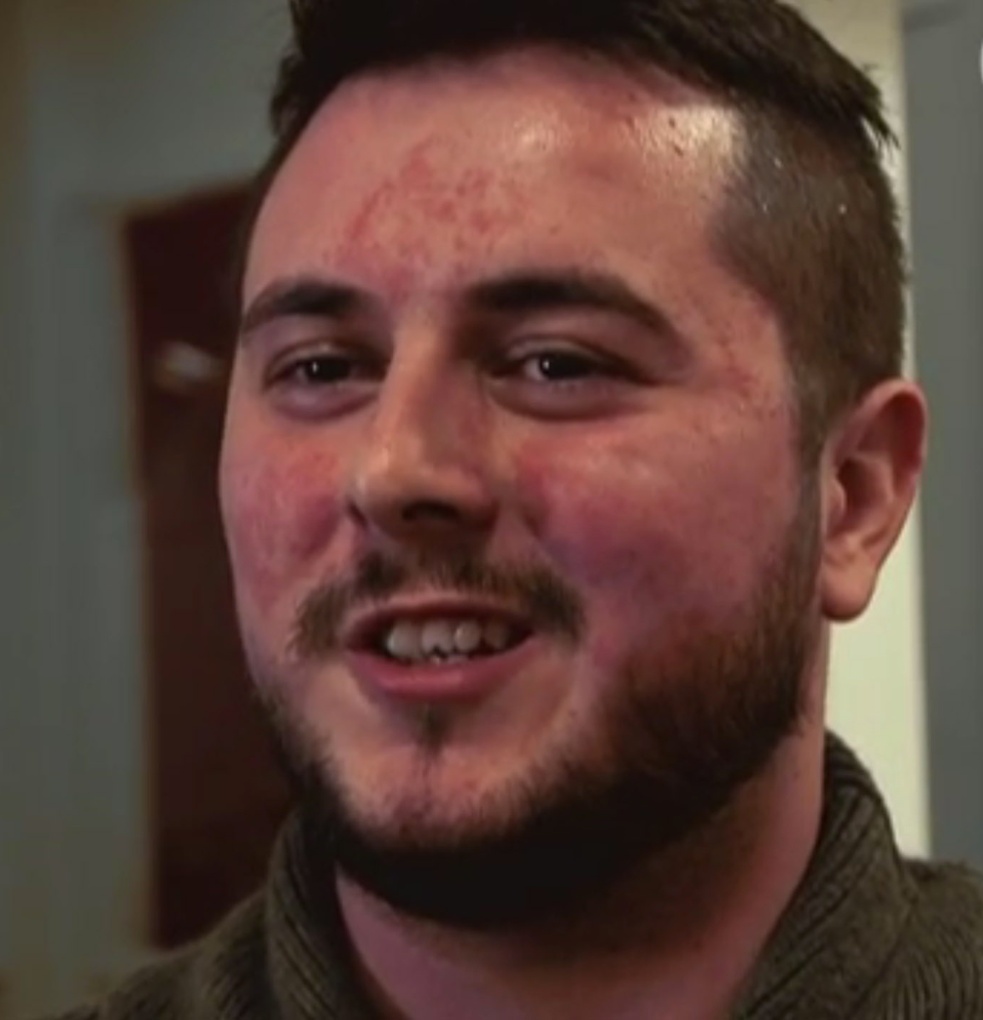 Andre, a farm worker in Denmark, who has the infection, which has developed into spots on his skin.

The discovery on UK shelves of pork contaminated with a livestock strain of MRSA prompts calls to curb misuse of antibiotics in intensive farming.

Pork sold by several leading British supermarkets has been found to be contaminated with a strain of the superbug MRSA that is linked to the overuse of powerful antibiotics on factory farms, a Guardian investigation has revealed.

Livestock-associated MRSA CC398, which originates in animals, has been found in pork products sold in Sainsbury’s, Asda, the Co-operative and Tesco. Of the 100 packets of pork chops, bacon and gammon tested by the Guardian, nine – eight Danish and one Irish – were found to have been infected with CC398.

CC398 in meat, which poses little risk to the British public, can be transmitted by touching infected meat products or coming into contact with contaminated livestock or people, although it can be killed through cooking.

Many people carry the bacteria without any signs of illness, but some have developed skin complaints, and the bug can cause life-threatening infections, including pneumonia and blood poisoning. Experts warn that the superbug has emerged as a result of antibiotic use in intensive farming and there is evidence that the UK could be at risk of a wider health crisis unless the issue is tackled by the authorities.

The superbug CC398 is a variant of the more commonly known MRSA found in hospitals and is endemic in pig farms in some European countries, particularly Denmark, Europe’s biggest pork producer and a key exporter to the UK. The Guardian tested 74 Danish pork products and 25 British, and one from Ireland.

CC398 is linked to intensive farms, where the density of pigs crowded together becomes a flashpoint for disease, and farmers become reliant on antibiotics to keep animals healthy and alive. This has led to the emergence of CC398, which is resistant to antibiotics.

Two thirds of Denmark’s pig farms are currently infected with CC398, where it is spreading rapidly: 648 people were infected with CC398 in 2013; in 2014, 1,271 people contracted the bug. Of those infected two people died as a result of the infection, and many suffered serious blood poisoning.

None of the British pork tested by the Guardian was infected with CC398, but a similar study carried out by the Alliance to Save Antibiotics, a campaign group which includes the Soil Association, did identify the superbug in pork from British farms. In findings due to be published on Thursday, the Alliance identified the bug in a pork sausage and in a packet of pork mince purchased in the UK. Fifty-two samples of pork from supermarkets in Bristol, Cambridge, London, Northumberland and Surrey were tested by the University of Cambridge on behalf of the Alliance. The findings confirm that CC398 has now spread from British farms into the domestic pork supply chain.

It’s an epidemic out of control, says Kolmos
A leading microbiologist has warned Britain to see the situation in Denmark as a warning. “[It] is an epidemic [that’s] out of control in Denmark,” Professor Hans Jørn Kolmos, a microbiologist at the University of Southern Denmark told the Guardian. “[Britain] should be worried about it, you should look at our problems. We should have intervened seven years back when we saw the first cases. Don’t think that this is a problem that will solve itself just by closing your eyes,” he said.

A Guardian film made during the investigation into infected pork also reveals how CC398 has already crossed the species barrier in the UK. A little-reported study by the University of Edinburgh, published in 2014, found the bug in the umbilical cords of two newborn babies in Scotland.

The Scottish study is thought to be the first confirmation in the UK that the bug has travelled from livestock to humans in Britain, though researchers were not able to explain how the superbug spread and there is nothing to suggest the babies became ill as a result of coming into contact with CC398. 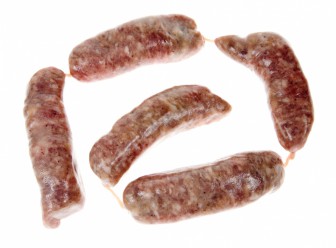 The bug has been identified in a pork sausage, confirming the spread of the infection from British farms.

Dr Melissa Ward of Edinburgh University, the study’s lead researcher, told the Guardian: “We were not able to trace the exact source of CC398 for the individual humans in our study. MRSA bacteria can live on the skin of humans and animals, often without causing any symptoms. The bacteria can spread from person to person, and between animals and humans, by close contact such as touching,” she said.

But Ward said the findings “emphasise the need for strict biosecurity measures in the food production industry and the importance of infection control measures in hospitals, as well as responsible antibiotic usage in both veterinary and human medicine”.

In response to the Guardian’s findings, Sainsbury’s, Asda and the Co-operative said that while they believed there was little risk to consumers they were investigating the sources of contaminated pork.

Sainsbury’s said its staff “routinely test our own products for a range of microorganisms and take advice from all the relevant authorities”, and reiterated that CC398 could be eliminated through cooking.

Asda said: “As a responsible retailer we take any concerns over food safety seriously and work closely with our suppliers to ensure we have secure measures in place to guard against any potential issues.”

The Co-operative said it was “investigating the findings with our Danish bacon supplier, who is at the forefront of research into LA-MRSA CC398”. 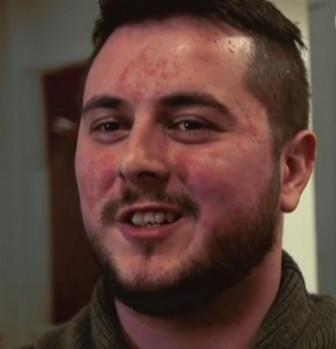 Andre, a farm worker in Denmark, who has the infection, which has developed into spots on his skin.

The Guardian’s investigation has established that the spread of CC398 in Denmark is being fuelled by the sector’s reliance on a large number of casual workers who unknowingly contract the superbug and then pass it on to others in the wider community. The UK’s livestock sector also relies on many casual workers who may move from farm to farm. According to Danish union leaders, workers receive little or no training relating to MRSA.

A group of Romanian workers in Denmark who were interviewed as part of the Guardian’s investigation say they knew nothing about MRSA until after they started working at farms. One former farm worker infected with the bug said: “I was three months on the farm, [and] I got some spots on my scalp, also on my chest and I thought first it’s from the dust and the conditions.”

“[Eight months later] I was in Romania on holiday and I visited the doctor and they took some examples from my skin and they said I have MRSA.”

Danish government miss basic knowledge of how widespread MRSA is
The Danish government has pledged to tackle spiralling CC398 rates by reducing the amount of antibiotics used in pig production by 15% by 2018, and to improve biosecurity by strengthening hygiene training of pig-farm workers. Despite this, Dan Jorgensen, Denmark’s minister for agriculture, admitted the situation was a “catastrophe” because the authorities “don’t even have the most basic knowledge of how widespread MRSA is”.

The FSA said: “There are no known cases of people contracting LA-MRSA CC398 from eating meat in the UK. Even on the continent where LA-MRSA CC398 is much more prevalent there is no clear evidence of food being linked to infection in people. Previous research has found LA-MRSA in meat on sale in the UK and we are working with experts from across government to better understand the potential risk to public health.

“As part of this we will be consulting our independent expert advisory committee on the issue later this month. In the meantime, consumers should be aware that any risk of contracting MRSA through meat is very low when usual good hygiene and thorough cooking practices are observed.”

This story is republished from Guardian with permission. See original story.

What is the superbug LA-MRSA CC398 and why is it spreading on farms?