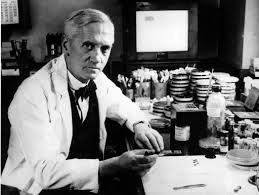 Sir Alexander Fleming, (6 August 1881 – 11 March 1955) was a Scottish biologist, pharmacologist and botanist. His best-known discovery is the antibiotic substance penicillin in 1928.

European authorities have no records on the new spread of resistance germs from pigs to humans. Scientists say the total death toll for resistant antibiotics is outdated and too low.

Sir Alexander Fleming, (6 August 1881 – 11 March 1955) was a Scottish biologist, pharmacologist and botanist. His best-known discovery is the antibiotic substance penicillin in 1928.

The news of four deaths in Denmark caused by infections from livestock associated (LA) resistant germs has not reached European authorities, except through media reports.

The European Centre of Disease Prevention and Control, ECDC, based in Solna, Sweden keeps no record of infections from different strains of resistant bacteria.

Dominique L. Monnet, Head of the Antimicrobial Resistance and Healthcare-Associated Infections Programme at ECDC, explains in a written comment:

EU-commission has no knowledge of dangerous big-bacteria

Anne Glover, Chief Scientific Adviser to the President of the EU-commission José Manuel Barroso, adds to this when asked by Investigative Reporting Denmark:

– If the ECDC does not know, then there is no knowledge of this in the Commission either. But I will pass on your question to our newly formed working group of scientific advisers.

The unknown figures of how germs spread from animals to man is not the only grey area concerning antibiotic resistance.

Estimated in 2009: 25,100 deaths caused by resistent bacteria
The first and so far only scientific study on a European level was done by ECDC and European Medicines Agency, EMA, in London, UK in 2009. The report, ”Time to react”, was based on data collected two years earlier.

The report estimated a death toll of 25,100 per year– which covers the effects of all different kinds of antibiotic resistance, not only from MRSA – and has become an established number since.

Most likely it is set far too low.

Otto Cars, a professor of Infectious Diseases at Uppsala University in Sweden and a chairman of ReAct, a network and campaign organization on antibiotic resistance, says there are only three global studies on the subject:

– There are most likely considerable underestimates in all these studies, as they have only documented some infections from chosen bacteria, comments professor Cars.

A recent study by the German Association for Hospital Hygiene, Deutsche Gesellschaft für Krankenhaushygiene, estimates as many as 42,000 yearly deaths from hospital-acquired infections in the country, although the role of resistant germs is not specified.

Antibiotic resistance – a threat with the same magnitude as global warming
In spite of weak data on the actual conditions, scientists are in very little doubt about the perspectives.

At an annual conference Euroscience Open Forum held in Copenhagen in June 2014 attention was given to antibiotic resistance as a threat with the same magnitude as global warming.

Barroso’s adviser: We should take to the streets

Anne Glover, scientific adviser to president Barroso, and a microbiologist herself, gave a provocative presentation titled ”Do you want to die by carelessness?”

– To the individual patient the side effects of antibiotics are small, but they are truly large for society.

That’s why the use of antibiotics cannot be a choice by the individual. The use should only be allowed on prescription. And we ought to take to the streets to protest against the excessive use in agriculture, she said.

Analogy of a tsunami built up in slow motion

Henrik Caspar Wegener, Chief Academic Officer at Technical University of Denmark, made the analogy of a tsunami built up in slow motion:

– We are standing on the shore, watching the wave rolling in and keep discussing whether we should build dykes or ditches or learn to swim.

Birgitta Henriques Normark, Head of Department of Bacteriology at the Swedish Institute for Infectious Disease Control, pointed at medical treatments such as hip replacement, organ transplants, cancer chemotherapy and care of preterm babies.

– Without effective antibiotics none of these treatments are possible, she said.

Important documents from the Copenhagen-conference

Anne Glover: Do you want to die by carelessness

This story has been published in Göteborgs-Posten Sunday 3rd of August 2014 and is republished with their permission, thanks to Staffan Dahllöf.